Becoming pregnant while employed is not a crime. Yet many companies treat pregnant employees as if they were criminals. A company may suddenly cutting a pregnant woman’s hours, give her undesirable tasks, harass her, or just flat out terminating her for a fake reason. What’s up with that???

If you feel you’ve been the victim of pregnancy discrimination, you have the right to challenge your employer and seek justice. This article was written to discuss pregnancy discrimination, what California and federal law says about the practice, and to take a brief look at a real-world case (the Bohm Law Group handles lots of these cases). If you have been thinking about calling an employment attorney, read this article to see if you identify with anything discussed here. Then call the Bohm Law Group  to find out what our attorneys can do to help you.

A Los Angeles Restaurant Engages in Pregnancy Discrimination, and Pays the Price

In early July 2018, a Los Angeles area restaurant and jazz club, LA Louisanne, was forced to settle a pregnancy discrimination case filed by the Equal Employment Opportunity Commission (EEOC). Chief among the charges contained in the federal complaint, was that the restaurant cut a pregnant cocktail waitresses’ shifts from 30 hours per week to 16 hours per week once it learned of her pregnancy. This despite the fact that another non-pregnant worker received more hours. It was also alleged that the waitress was subject to rude comments from co-workers. The EEOC stated that it believed the restaurant also engaged in discriminatory behavior with other pregnant employees.

As a final insult to the pregnant waitress, the restaurant wouldn’t allow her to return to work once her child was born.

Rather than fight the charges it faced in US District Court, LA Louisanne decided to settle and forked over $82,500. In addition to the financial settlement, the restaurant agreed to provide training to its employees regarding discrimination and harassment and allow the EEOC to monitor the restaurant’s compliance over a three-year period.

A press release issued by the EEOC quoted Anna Park, regional attorney for the EEOC’s Los Angeles District, who said, 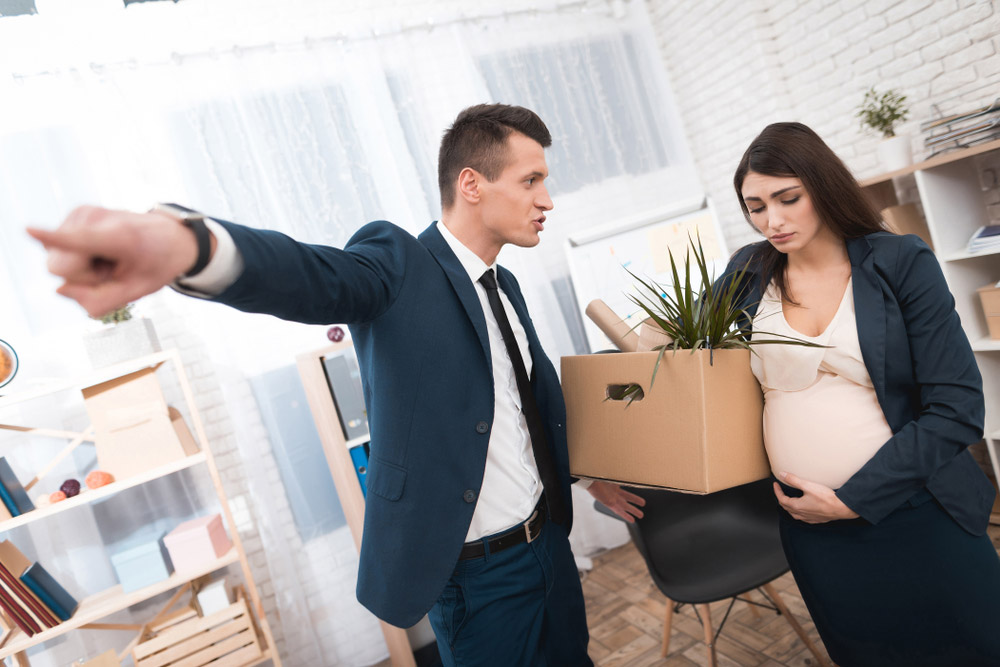 Pregnancy Discrimination is Forbidden by Federal and State Laws

In the case discussed in the previous section, the EEOC alleged that the restaurant’s conduct violated Title VII of the Civil Rights Act of 1964 as amended by the Pregnancy Discrimination Act of 1978. The law states:

“Women affected by pregnancy, childbirth, or related medical conditions shall be treated the same for all employment-related purposes including receipt of benefits under fringe benefit programs, as other persons not so affected but similar in their ability to work.”

Additionally, the Family and Medical Leave Act allows pregnant women to take up to 12 weeks off work due to the birth of a child. California state law, the California Family Rights Act, also allows for a 12 week leave.

Section 1290 of California’s Fair Employment and Housing Act (FEHA) states that it is unlawful to discriminate against employeesbased on a number of classifications including a person’s sex, which includes pregnancy status.

While attorneys in California might file a discrimination case in federal court, it’s usually preferable for California employees to file suit in state court. This is because California’s laws generally provide more protection for workers. For instance, Title VII (federal law) applies only to businesses with 15 or more workers. FEHA (CA’s state law) meanwhile applies to businesses with five or more employees. Additionally, FEHA doesn’t put a cap on damages, while Title VII limits the amount to $300,000.

Right to Sue and the Statute of Limitations

If you feel you’ve experienced discrimination because of your pregnancy status, remember that you have a limited amount of time to sue. In California, the statute of limitations is typically two years from the date the discrimination took place. However, in cases involving government employees, the time frame is even shorter.

Furthermore, whether you intend to sue in state or federal court, you will need to obtain what is known as a right to sue letter from the appropriate agency. Before filing suit in state court, it is necessary for either you or your attorney to obtain this letter from the Department of Fair Housing and Employment. The deadline for filing for this letter is one year from the date the discrimination took place.

If keeping these dates straight in your head is at all confusing, it might be time to contact an attorney to help guide you through the process.

While it’s impossible to predict how much a person will be able to collect in a discrimination lawsuit, it is possible to discuss the different types of compensation available. These include:

Back pay: Money that you may have been denied by the employer due to discrimination. For instance, denied overtime wages. You might be able to recover money you should have been paid.

Lost Wages:This includes money that you would have made had there been no discrimination. For instance, if you were fired due to pregnancy discrimination, and were unable to find other work for several years, you might be eligible to recover those lost wages. If you were making $40,000 at the time of the wrongful termination, and were unable to find work for three years, you might be able to recover $120,000 in lost wages.

Pain and Suffering Damages: This amount might be determined by a judge or jury as compensation for physical or mental suffering experienced as the result of discrimination. Pain and suffering might include depression, anxiety, nightmares, insomnia, weight loss, nausea, headaches and other issues.

Punitive damages: These are the awards that often grab headlinesdue to their large amounts. This is compensation awarded to an employee in an attempt to punish the company and prevent the discrimination from ever happening again. However, these awards are rare and only given in cases involving fraud, malice or oppression.

If you feel you’ve experienced discrimination as the result of your pregnancy status, it might be worth your time and effort to contact an attorney and explore your options. Pregnancy discrimination can take many forms and can include:

As discussed in earlier sections of this article, there is a limited amount of time to file suit against an employer, and once that window has shut, it’s closed forever. If you have questions, talk to a lawyer at the Bohm Law Groupsooner than later. You have a right to stand up for yourself.