Potential disasters are all around us: slick floors, wobbly railings,  crooked sections of sidewalk. Though we encounter these things on a daily basis, all it takes is one misstep — a little pressure in the wrong spot, and a chain reaction of failing limbs and overcompensating muscles is set in motion, ending in serious injury.

A person who’s seriously hurt in a slip and fall accident will often deal with doctor visits, personal therapy, hospital and ambulance bills, phone calls from insurance adjustors and a long painful recovery. As if this isn’t enough, the question of whether or not to sue may also loom heavily in an injured person’s mind.

This article was designed to generally discuss some of the legal issues surrounding slip and fall accidents. If you’ve fallen and been injured due to someone else’s negligence and are wondering whether you should contact a trial attorney such as Lawrance Bohm, hopefully this article will help you with your decision.

Slip and Fall Statistics and Other Info

According to the National Floor Safety Advisory Institute(NFAI), falls account for 8 million hospital visits, with fractures occurring in 5 percent of all falls. Half of all accidental deaths in the home are caused by a fall.

Common areas where falls occur include:

While there are a number of different ways a person can slip and fall, common injuries include:

These injuries can happen in another person’s house, your place of employment, a store at the mall, or on a public street. Wherever such an injury happens, it’s recommended you talk to a personal injury attorney sooner than later, so that he or she can gather as much information about the event as quickly possible.

What California Law Says About Slip and Fall Injuries

The question of whether or not an injured person can seek compensation for an injury lies in whether the owner of the dangerous property was negligent.

Injured clients will often ask their attorneys how a property owner, company or government entity is found to be negligent. The answer to this question can partially be found in California Civil Code §1714(a), which states:

“Everyone is responsible, not only for the result of his or her willful acts, but also for an injury occasioned to another by his or her want of ordinary care or skill in the management of his or her property or person…”

The key phrase in this section is “ordinary care.”

California Courts have long held that property owners have a duty to exercise ordinary care in the management of their property in order to avoid exposing other people to an unreasonable risk of harm. Failure on the part of the property owner to exercise such care can constitute negligence.

When determining whether a property owner is negligent in a slip and fall case, a jury may consider a number of different factors including the foreseeability of the accident, the injured party’s behavior leading up to the accident, as well as whether or not similar accidents have occurred on the premises before.

Because of the many considerations involved in a slip and fall case, it is highly recommended the injured person hire a good personal injury attorney.

Who is Responsible in Slip and Fall Accidents?

One of the key questions a personal injury attorney will attempt to answer in a slip & fall case is who should be held responsible for the accident. The answer to this question will depend on where the injury occurred. Did you fall on an improperly maintained portion of sidewalk? Were tree roots causing the concrete to buckle and crack? Was the city responsible for the maintenance of these things, or was it a private party? Perhaps you were visiting the apartment of a close friend when a portion of the deck’s railing collapsed. Is the property manager responsible? The building owner? These are the types of things your attorney will determine.

If the case goes before a jury, the injured person’s lawyer will have the responsibility of showing: 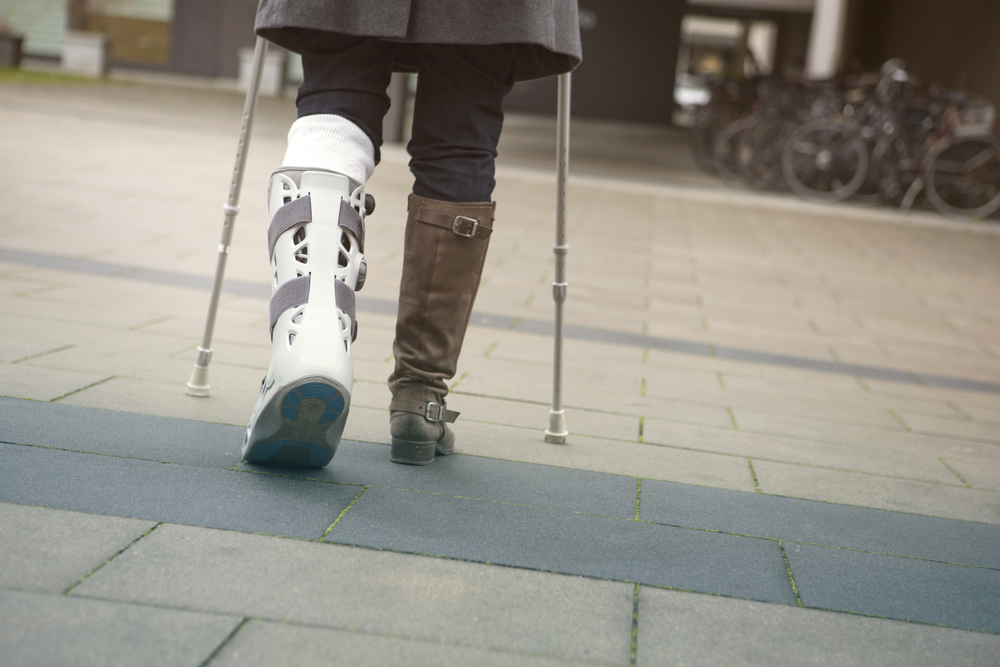 Slip & Fall Injuries in the News

In 2014, the Los Angeles Times reported on a slip and fall case involving an elderly couple in the city of Glendale.  The couple was walking arm in arm along a public sidewalk when the husband tripped over a raised piece of pavement near a tree. As he fell, he dragged his wife down with him. According to the Times, the husband displaced his pinky finger and injured his back, while his wife tore her rotator cuff and suffered bruises on her elbows and knees. The couple’s medical bills added up to roughly $15,000. The couple filed a claim for damages, but a city attorney attempted to argue that Glendale wasn’t responsible for the couple’s injuries because the city was unaware of the uplifted sidewalk before the couple’s fall. However, after the couple filed suit with the help of a lawyer, the city decided to avoid a civil trial and settle.  The city council voted to award the couple $30,000.

Another slip and fall case was detailed in a 2016  Orange County Register article. The Register reported on the case of a school teacher who slipped and fell on a puddle while entering the Pechanga Resort Casino in Temecula. The woman’s attorney argued she suffered a concussion as a result of the accident, which lead her to experience loss of memory, fatigue, dizziness and vomiting. Medical experts who treated the woman stated that she was experiencing post-concussion syndrome. A school teacher for more than 20 years, the woman was forced to leave her students because of her health issues. Because the woman fell on Native American property, she was required to take her case through arbitration as opposed to the court system. Her case was presided over by a retired judge, who, after a five-day hearing, awarded the woman more than $2.8 million in damages.

It’s important to remember that the two accidents discussed in the previous section cover only a tiny fraction of the different ways a person can fall and be injured as a result of another’s negligence. Your particular situation might be very different. However, if you suffered as a result, you might be entitled to monetary compensation. A person who has been injured as a result of a company’s negligence or another person’s negligence should contact an attorney as soon as possible. The statute of limitations on personal injury cases is generally two years from the date of the accident. Once this time has lapsed, an injured person can no longer sue.

If you have questions about slip and fall accidents, or some other area of personal injury law, contact our office to learn how we can help you.